I can’t tell you how excited I am to be able to feature this amazing artist. I have been a fan of Vusiuz for a very long time, watching him from the sidelines with a slight “senpai~” vibe. His 3D animations are smooth, unique, and just cool as hell. I am honored to present to you Albert Ki, better known online as “Vusiuz”! 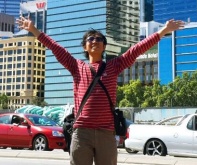 Albert is a 27 year-old professional animator in Indonesia. An alumni of Binus University, 3rd Generation Animation Major from 2008-2012, he is by no means an amateur. He first fell in love with art when he was just a young child, starting out with cutting paper and coloring as most children do. As he grew older, he developed an affinity for anime, and eventually found his way to 3D art. You can read all about his development as an artist in his journal entry here.

He works as a freelance 3D character artist, working on random commissions at night, and movie projects during the day. He has worked in animation studios for projects including Knight Kris, Marooned Land, and Undergreen Story. Currently, he is hard at work on an animation called “NORTH” , which is a feature-length 3D animated film, inspired by testimonials of survivors from North Korea’s political prisoner camps, currently a work in progress at TED. (I wasn’t aware of this until I interviewed him for this article, and now I’m going to be following this project very closely! Wow!)

This is the main character in “Jitenclock”.

Aside from his career, Albert has his own original project that he calls “Jitendrium Clockwork”, or “Jitenclock” for short. It’s a story about the most powerful villain in existence who went dormant long ago and has awakened again in the far off, distant future in a world that has become weak and frail. The sad state of the world has taken away his purpose as a villain, so he and his newly met comrades join together to change the fate of the planet. This is such a cool concept, I really hope he can complete it! Unfortunately, for now it is on hold. “If I work on it, I can’t do another project or commissions, I got no cash flow, but if I work for another project or commissions, I would not have time to continue Jitenclock, dilemma!” Albert confessed. I think he has the potential to make some money working on his own project on Patreon, but I completely understand the need to work an actual job to pay the bills.

You can find Albert on Facebook, Instagram, DeviantArt, Twitter, and Youtube, or by searching “Vusiuz” on Google.  He takes commissions, and you can find all of his commission information here. His prices are VERY fair for the quality of his work.

Do you want to have your art featured on my blog? I’m super picky about the artists I feature here, but you can fill out a feature request form and I’ll help give you a signal boost however I can, even if you don’t quite make the cut for a feature article.